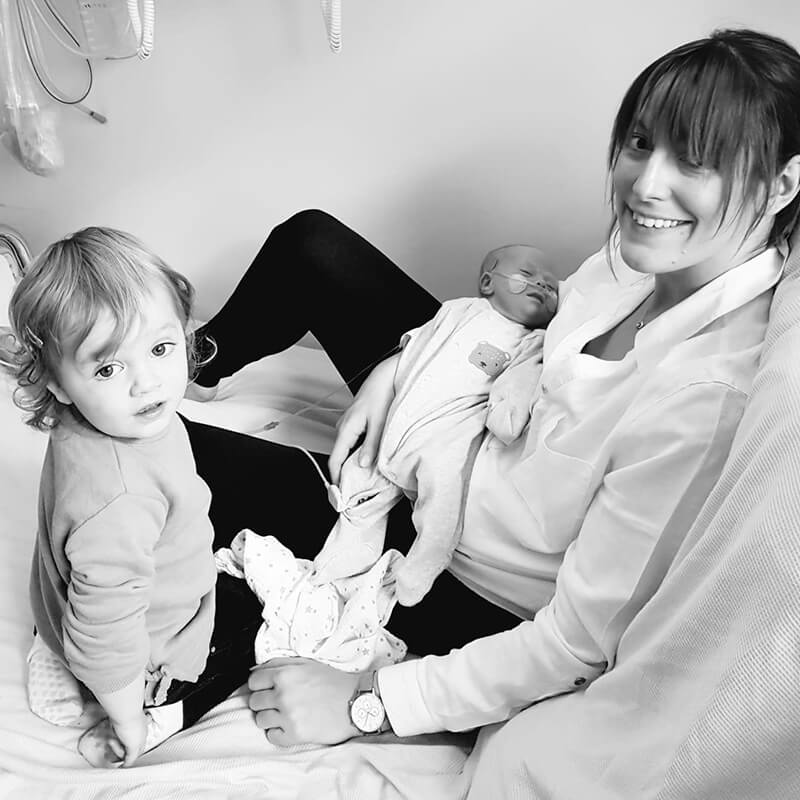 When I became pregnant with my second child, I knew very early on I wanted to have my baby at home. I’d had a really good experience with my first labour having completed a hypnobirthing course beforehand and laboured very well at home before transferring to hospital at 7cm and I felt confident that this time I could happily stay at home for the whole birth. My husband was not so sure but supported me in exploring the option with our hospital of choice; however, they were unable to facilitate a home birth as we were too far away from the hospital.

I still strongly felt having my baby at home was the right thing and became more anxious at the thought of going to hospital so decided to explore other options to help facilitate this. I also felt that having Private Midwives present whom we’d met prior to the birth would help reassure my husband about my birth plan as he still needed a bit of convincing on a home birth.

Enter Tess and Leonie: the minute I met them, I knew they were the Midwives I wanted present at the birth of our baby. They were immediately warm and open and put me straight at ease – hugely important qualities in Midwives! As they sat with us and chatted about possible options and birth plans, I knew they would respect our birth choices, and it really would be a choice, not a foregone conclusion bound by (sometimes arbitrary) hospital policies or just because it’s the “done thing”. They were both professional, experienced and knowledgable which really put my husband at ease enough for him to agree to a home birth – which says a lot!

We engaged Tess and Leonie relatively late in my pregnancy (around 32 weeks) but their prenatal care was personal and unhurried; two words I could not apply to my NHS appointments to date. Their tips on how to prepare for a home birth were really useful and helped make me feel confident and excited in the lead up towards my labour rather than nevous.

In the few days leading up to the birth I had a few twinges and knew I could always message them with questions for reassurance. Knowing they were on hand for support and any questions, however small, was hugely reassuring. Then, the day things finally started to happen, we kept them in the loop on the progress of my contractions and they arrived at exactly the right time – not so early they were hanging around but with enough time to check me over and get me in the pool for my son to arrive an hour after they did. They gently helped guide my husband and I through the labour without being at all intrusive. I feel truly blessed that I had the birth I wanted, exactly as planned.

Once our son arrived, Tess had the difficult job of telling us they suspected our son had been born with Down’s Syndrome and that we needed to transfer to hospital. I remember this moment with absolute clarity and I am so thankful it was Tess that delivered this difficult news to us and she did so in the most sensitive way. I now know a lot of families receiving the same post-birth diagnosis have it delivered in a far less sensitive way which can have a huge impact on families.

Once we transferred to hospital, we were very fortunate that Tess and Leonie continued their care to help support us with feeding challenges providing helpful advice, recommending lactation consultants and herbal remedies. Their support whilst we were in SCBU was invaluable and sometimes just having someone consistent to speak to rather than a different nurse every shift really helped. We were also hugely appreciative that they continued to support us until we were discharged and settled at home, beyond their original contracted term. I really feel they went above and beyond and that Midwifery is a true calling for them both.

Whilst we were thrown a few curve balls once our son arrived, I am to this day so thankful that we found Tess and Leonie to support us through the birth and then postnatally. Having had control over his birth and how we welcomed him into the world when everything else after that was completely unplanned means even more now and I would not hesitate in recommending Tess and Leonie as independent Midwives either at home or at hospital.