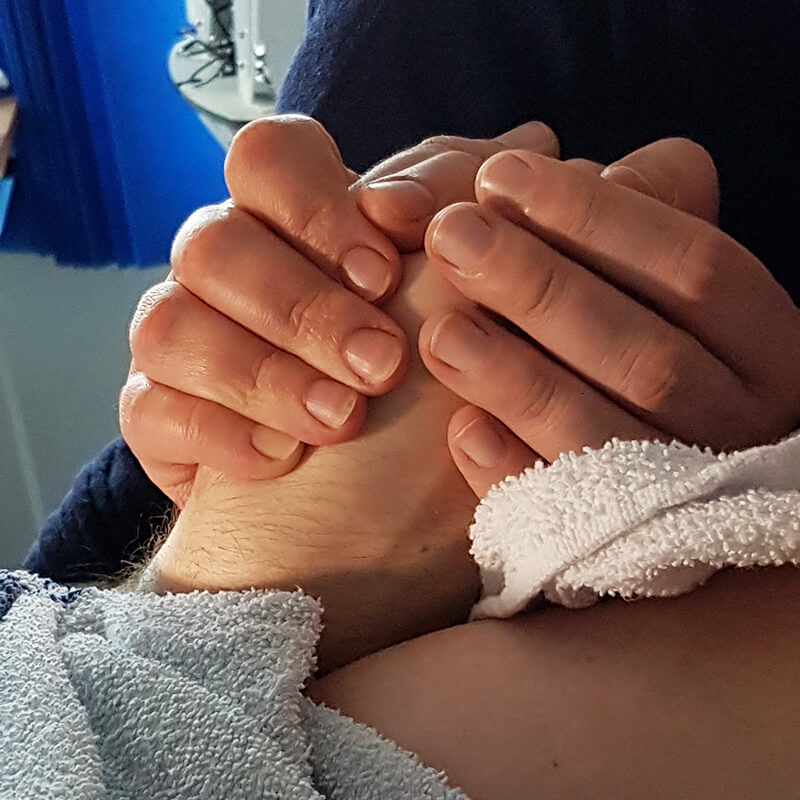 5 ½ years ago, I gave birth to my son after experiencing two miscarriages and being told I might not be able to carry a pregnancy to term. I was a nervous wreck throughout the entire pregnancy. When my son was diagnosed with a cleft lip late in the pregnancy and we were told he might have other birth defects as well, my anxiety increased. The NHS care I received throughout the pregnancy wasn’t terrible, but it was typical – there was very little continuity of care, I never felt like anyone was listening to my concerns or my wishes, and ultimately I allowed myself to be pushed into making decisions that weren’t right for me or my family out of fear. Instead of the natural birth in the birth centre that I had hoped for, I had an induction, leading to a very quick and traumatic hospital birth, a postpartum haemorrhage, and an awful postnatal period that had a negative impact on all 3 of us. I knew I never wanted to go through that again.

Four years later, my husband and I finally felt ready to think about trying for another baby. We had moved to a new area, and I felt sure that this time around things would be different. I managed to control my anxiety throughout the early stages of pregnancy, until I had my first visit with a consultant (necessary to due to some unusual, but fairly minor, health conditions) who refused to listen to my wishes and made me feel there was a reason to be fearful about this pregnancy and birth. I started feeling anxious again, and despite his assurances that this was a different hospital and the outcome would be different, it was all starting to feel very similar.
That was when I started looking into private midwifery care. I wanted continuity of care, from someone I chose, who knew me and understood what I wanted and needed. When difficult decisions needed to be made, I wanted advice from a professional I knew and whose opinion I could trust.

At first, I started to feel discouraged because there were no private hospitals in my area, and, as I didn’t want a home birth, I thought there was no other option. But then I found Tess and Leonie. I liked that they worked together as a team. When I met them, they were so kind and took the time to listen to my history, my fears, and my hopes for this pregnancy and birth.

At the beginning, my husband and I had our doubts about whether or not it was “worth it” to engage private midwives when I was still planning a birth in an NHS hospital or a birthing centre, but he said if it relieved my anxiety it would be money well spent. And it was. Leonie used her contacts at the hospital to get me an appointment with the consultant who I was originally supposed to see, and I was given approval to use the birthing centre.

When what should have been a simple check up at the MAU turned into a disaster, Leonie advocated for me and made the complaint that needed to be made but that I didn’t have the strength to do myself. When I needed to go in again later in the pregnancy, they took turns spending a whole Sunday with me in the hospital so I wouldn’t be alone while my husband took care of our son. Anytime I started feeling anxious again, they were always available on What’s App or by phone to give me reassurance. They made me believe that things would be different – and better – this time around. I was much more relaxed, and by the end of my pregnancy, was even looking forward to the birth.

In the end, this birth didn’t go as planned. My labour progressed very quickly, and I developed blurred vision which meant that upon arrival at the hospital, the birthing centre refused to admit me until I had been evaluated in the delivery suite. When Leonie and Tess realised how quickly things were progressing, they both jumped in their cars and raced to the hospital to make sure at least one of them would be present for the birth. In the end they both made it.

Even though it was nothing like I had planned, I felt unbelievably supported the entire time. I was barely able to speak by the time I got into a room, but we had discussed everything so well I was still able to tell the hospital midwife the most important details regarding how my health conditions would affect the birth and what she could do to help, as there was no time to read my notes or birth plan. Tess arrived first and I had my husband on one side and her on the other, both encouraging me. Leonie arrived shortly after and she worked with the hospital midwife to make sure everything was done according to the consultant’s directions and my wishes.
Thanks to Tess and Leonie, I felt much more present during this birth, and even though it was very quick, I didn’t go into shock the same way I did after the quick birth of my son. I also didn’t feel like I had missed out on something the way I had after my first birth – I may not have had time to labour in a pool, but they knew what was most important to me and made sure I got the most out of the experience. Afterwards, they took pictures for us while my husband and I enjoyed our new daughter.

Despite the best efforts of the midwife, I had some complicated tears very similar to what I experienced after the birth of my son. Thanks to Tess and Leonie, although the clinical details were similar the experience was completely different – after my son’s birth, I was left alone to wait for a consultant to come stitch me up, leading to excessive blood loss and panic when it was discovered. The pain and trauma of that was much worse than giving birth had been, and again, Leonie and Tess knew that and did everything they could to give me the best outcome given the circumstances.

They advocated for me every step of the way, made sure I understood everything that was being done and that I had the time to process it all.

They took turns holding my hand and holding my daughter so that my husband could stay with me the whole time. When it was finally over, they didn’t leave before making sure there was a plan in place for my care afterwards.

Once we were home, they continued to care for us. I thought that, as a second-time mum who had managed a very difficult postnatal period with a baby with a cleft lip, that I wouldn’t need much help breastfeeding a baby without any special needs. I was wrong! Two days after her birth, I noticed my daughter was starting to develop jaundice just as my son had.
Tess and Leonie came out and spent a long time with us, helping me optimise her latch and reassuring me.

Thanks to Tess and Leonie’s quick intervention, the jaundice never got as bad as it probably would have otherwise, which meant we were able to spend the first few days of our daughter’s life at home with her, rather than leaving her alone in an incubator in the hospital.

Leonie and Tess have made such a difference to our family. Having had such a positive experience of pregnancy and birth has made me feel more confident as a mother, as well. Eight weeks after giving birth, I’m still overwhelmed thinking about everything they did for me. It’s almost enough to make me want to do it all again! Not really – my husband and I feel like our family is complete – but if we were ever to have another child, they would be the first call I’d make.