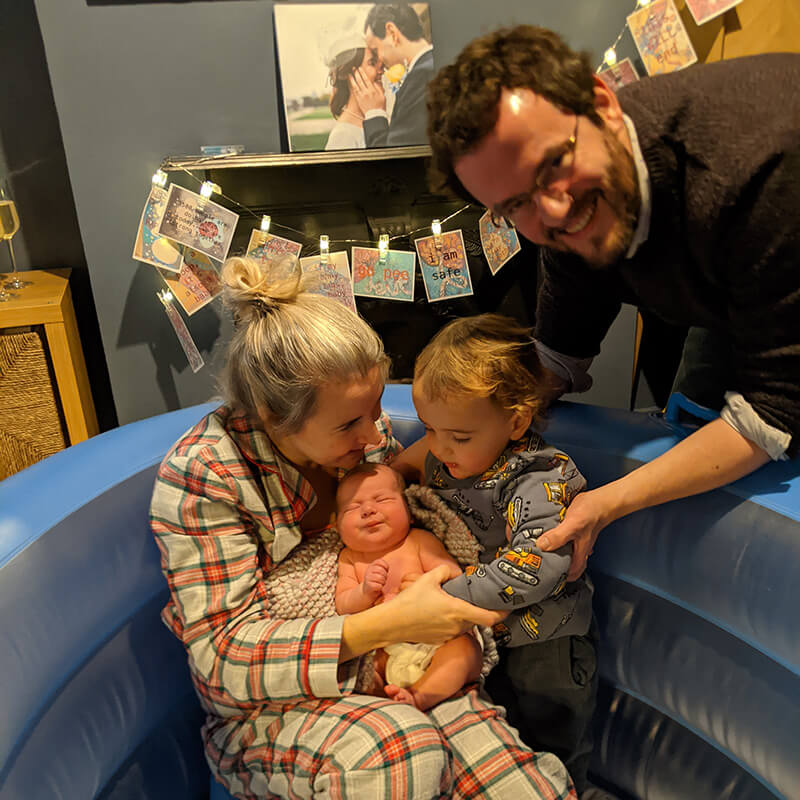 We are Abbie and James, we had Rory in 2018 and Leonie and Tess were our midwives for Zachary who was born in November 2020!

I found out I was pregnant with my second child at the end of February 2020: just before the pandemic hit. I knew I wanted a homebirth and was happy to find out my area of NHS offered a case loading team for this – however within a week of booking it was lockdown, and this team was disbanded due to covid. I was really disappointed to lose the promise of continuity of care, especially when I found out my next face to face appointment with a midwife wouldn’t be until 24 weeks. Rory had arrived early at 36 weeks after a very quick labour. I found it quite traumatic, had done a lot of reflecting and my own research and I knew what I wanted to be different this time. Key for me was having someone that I knew and respected and that also knew me at the birth.

I had been considering a doula, I started looking into this and spoke to some wonderful women. However, my husband was less keen on having ‘extra’ people around and feeling like a spare part. I then found out from a friend that independent midwives were ‘a thing’ – I hadnt heard of them before. This seemed like a good solution as there would be no ‘extra’ bodies in the room and it would be intimate but would offer the level of relationship that would make me feel secure when birthing. We spoke to a few different midwives, but when we spoke to Tess and Leonie we both knew they were the ones for us.

The main thing which made us hesitant in hiring a private midwife was the cost. It is a large sum of money – however, investing in the birth of a child did feel like it wouldn’t be wasteful! In addition, the value for money was UNPARALLELED. Tess and Leonie were available around the clock, for any concerns either tiny or huge, for light-hearted moments and to support us with bigger decisions and advocacy. They literally rode the rollercoaster with us for 5 months!

A secondary concern was that if we had to transfer into hospital whether we would receive poorer care as the hospital staff might think, “who’s this princess swanning in with her own midwives?” Again, this was unfounded. They liaised directly and seamlessly with my NHS antenatal care and having worked in the area since qualifying know many of the hospital team. They helped organise for new-born checks to be done at home, and it was just so wonderful to have Tess with me when I did go in post birth to give a handover so I didn’t have to speak!

We chose them because they were so caring and friendly, and the warm relationship they share between them is infectious and made us feel at ease. Tess and Leonie’s personalities are completely different but complementary to each other. It felt like all bases were covered whether we wanted quiet, reflective, gentle hair stroking reassurance – or a firm, loud advocate (I’m not going to say who’s who!) but both were so obviously experienced, passionate and knowledgeable we knew we would be properly looked after. They are woman centred, up to date with research and evidence and shared the same views with regards to the feminist aspects of pregnancy that we do so they were a perfect fit.

I also really liked that they came as a pair so there would be nobody unfamiliar to us at the birth, as some of the other midwives we spoke to worked ‘alone’ so we would have one private midwife we knew, and then a second who we probably wouldn’t have met before would come to support.

A not minor consideration was that they really liked our dog, so we knew there would be no issues with him being around during appointments or the birth either!

When we booked them, I was just looking forward to having appointments at home; to having the reassurance they wouldn’t be redeployed during the pandemic or cancel my home birth, and that they supported a natural, hypnobirthing birth and wouldn’t try to get me to lie on my back (in fact they would categorically counter this!) or push interventions that I really didn’t want.

They did meet these expectations, but they also brought so, so much more to our family. I had some unexpected complications during pregnancy that started before they officially ‘took over’ my care. They were there for me through that, seeking knowledge from their wider network, supporting me to advocate for myself and also just checking into see if I was ok – this was completely absent from any NHS care. ~

I really looked forward to our antenatal appointments for a chat, to put the world to rights and I loved how James and Rory (and Digby the dog) were included in these appointments, which were flexible, booked around us, and lasted as long as I needed them to.

The birth prep meeting was probably even more useful for my husband than me, and it meant we went through a clear birth plan together, so I didn’t need to write one down or fight for it or justify it through policies and procedures. They were wholly supportive of all options, clearly going through benefit/risks of all alternatives, but never trying to sway me, just to give me information for me to decide. They also brought up things I’d never have thought of – and introduced James to the ‘latch and catch’ in case the baby came before they got there!

Their support as I got to term… and then went over (unexpected after my first baby came at 36 weeks) got me through, and I was appreciative that they were not pushing for me to be induced unlike at NHS appointments. They also did all the administrative arrangements for things like new-born blood tests and cord blood checks, I didn’t have to worry about a thing. They helped me feel confident in my body and I was confident in them, so I had no anxiety around birth at all.

When my baby finally decided to make an entrance, they were there in a flash and the whole event was so beautiful, serene and calm. I think only about 10 words were uttered throughout the whole thing. I knew they knew my preferences; they knew me, they knew my baby.  They honoured everything and just responded to me. My husband commented on how in control I was, that I was at the centre of everything, and the room was full of womanly intuition and a mysterious silent communication that he couldn’t tap into! The contrast to my NHS birth were things were done ‘to’ me was vast.  I didn’t make it into the pool but you can’t have everything!

Postnatally, my experience after having my first son was irregular, unpredictable follow ups and demands to go to clinic for weigh ins, inconsistent breastfeeding support and no ‘care’. Nobody seemed to care about how I was as long as the baby was gaining weight. No one used his name, or even asked it. And that wasn’t even in Covid times!
This time around Tess and Leonie were there for everything, and I loved their visits when they would coo over my lovely new baby but actually spend more time looking after me, picking me up from the baby blues when needed and also fussing my toddler. They have huge available resources so were able to ask others for advice on things like tongue tie, breastfeeding, pelvic health and recommend other specialists to me.

I enjoyed every moment of my pregnancy and my birth and can’t wait to do it again mainly so I can hang out with them again! I had a very calm birth experience and avoided any intervention – no induction, and no instruments even threatened – and I birthed my 11lb4 baby completely unaided at home, and it was miles easier than my 6lb12 baby! I know for a fact this would not have been the case had we been in hospital, and I have my doubts if it had been at home with Midwives I didn’t know as well, my complete trust in their expertise kept me relaxed and calm.

I had a quicker and better recovery, both physically and emotionally, thanks to their wisdom and support. Everyone commented on how well I looked, and I think having them guiding me and really caring for us all was a big contributor.

I’m more confident in my parenting instincts thanks to their empowering me and nourishing my self-belief in myself in pregnancy.

The biggest benefit is I have made two friends as well as found two brilliant midwives.

“One of the big differences between Zac’s birth at home and the hospital experience of Rory’s birth is that, in hospital, Abbie’s discomfort was treated as a given, the overwhelming message was “having a baby is a shitty experience, if you can’t hack it, we’ve got drugs for you, otherwise, we’re just going to ignore it and plough through”. At home with Tess and Leonie, it was completely different, much more interested and empathetic to where Abbie was, and what she was feeling. Of course it still hurt, but it seemed like the pain mattered to, and was reacted to by, the people in charge of the birth.”

I already have recommended them, to everyone and anyone! I think their services are particularly beneficial to anyone who had any challenges in a previous pregnancy or birth; have complications; want a hands off home birth; want support advocating with consultants / other health professionals; people who would like support postnatally; anyone who wants to feel in charge of, intrinsic to and cared for during their pregnancy and birth… so basically, anybody who is pregnant!

Initially we had thought we would use private midwives just for this birth to gain confidence and said if we had a third baby we would go back to the normal NHS pathway. Unfortunately, there’s no going back now! 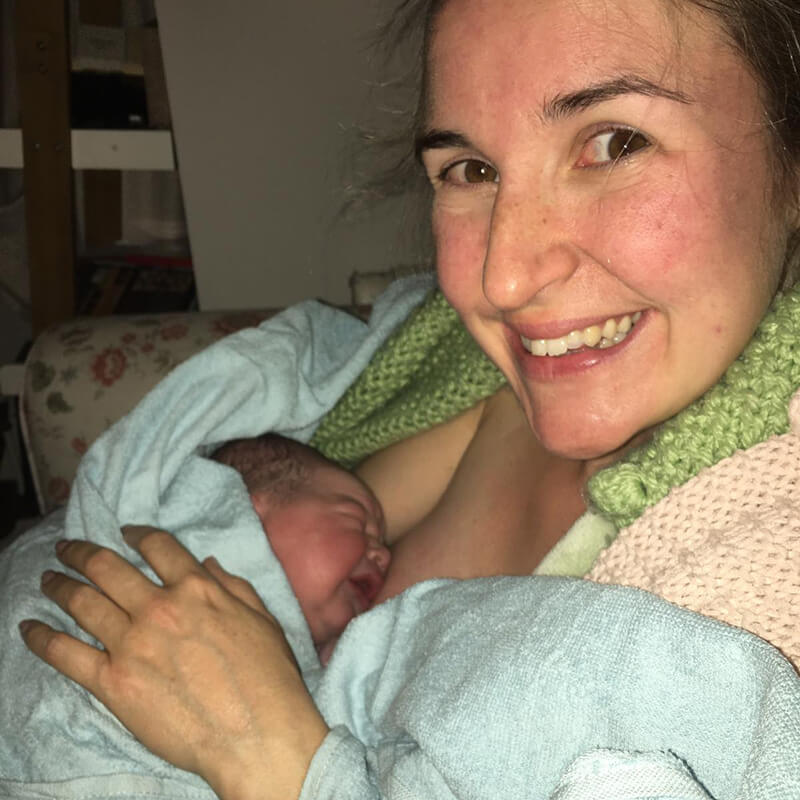 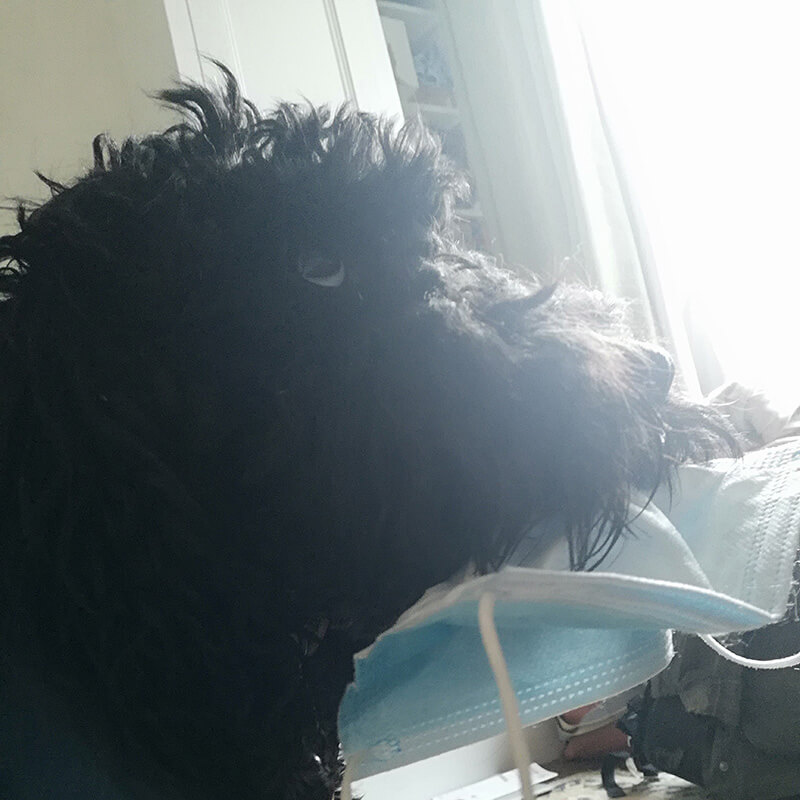